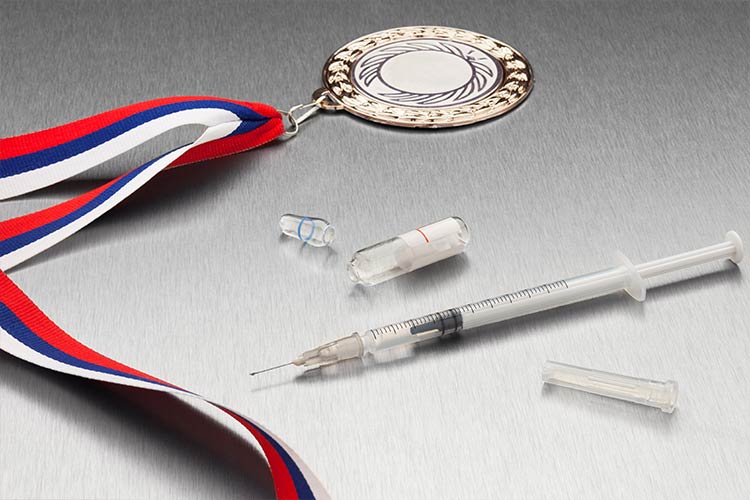 Every year 3,000 athletes worldwide test positive for banned substances and there are many sports who have a track record of using performance enhancing drugs including track and field athletics, bodybuilding, baseball, American football, weightlifting, boxing, wrestling, cycling, ice hockey, rugby, swimming and basketball.

Why do professional athletes use banned substances? Many people think that doping is a shortcut to better performance and thus success, however that isn’t the case. In fact, what these substances do is force the body to endure more stress and more exhaustion so that athletes can train, for example, 14 times per week instead of 7 times per week.

The biggest reason that an athlete may turn to doping, however, is money. The more medals you win, the more records you set, the more sponsors want you. And it is this drive for money that can unfortunately lead athletes down the wrong path to doping.

Keep reading to find out about the 10 biggest doping scandals that shook the world!

In 2001 Justin Gatlin was banned from international competition for two years after he tested positive for amphetamines. Gatlin later appealed on the grounds that the test had came back positive because of the medication he was taking for attention deficit disorder. Following this appeal he was given an early reinstatement by the IAAF.

Then in April of 2006, Gatlin again tested positive on another doping test but this time it is believed he tested positive for ‘testosterone or its precursor.’ Following the positive test result Gatlin claimed that he couldn’t account for these results as he had never knowingly used any banned substance. Coincidentally Gatlin’s coach, Trevor Graham, has coached eight athletes who have also tested positive or received bans for performance-enhancing drugs.

Gatlin accepted an eight-year ban from track and field but was later able to reduce this to four years on appeal. Gatlin has since made his comeback to the track where he is now running and sprinting faster than ever.

Landis was considered the biggest drugs cheat in cycling until Lance Armstrong was later exposed.

In July 2006, the Phonak Cycling Team announced that a urine sample that had been submitted by Floyd Landis, had tested positive for an unusually high ratio of the hormone testosterone to the hormone epitestosterone (T/E ratio) following stage 17 of the 2006 Tour de France. Landis was consequently suspended from professional cycling and was dismissed from his team. It was later disclosed that the test had found a T/E ratio of 11:1 in Landis’ sample, which is far above the maximum ratio of 4:1 that is allowed!

Landis was found guilty of doping 2-1 in 2007 and was banned from the sport for 2 years. Following this, Landis took to the U.S federal court to appeal this decision as he claimed it was tainted by partiality and conflicts of interest. The case was dismissed and the litigation surrounding the doping case ended.

In May 2010, it was reported by The Wall Street Journal that Floyd Landis had sent a series of emails to senior cycling and anti-doping officials in which he admitted to doping from June 2002 through to his victory in the 2006 Tour de France.

The Mitchell Report came about after George Mitchell (a senate majority leader & federal prosecutor) was appointed by the Commissioner of Baseball, Bud Selig, to investigate the use of performance enhancing drugs in major league baseball.

The investigation took place over 20 months and the found the following:

· After the mandatory random testing began in 2004, human growth hormone (HGH) became the substance of choice among players, as at that stage it wasn’t detected by tests

The Festina affair was a series of doping scandals that occurred during and after the 1998 Tour de France. The affair began when a large haul of doping products (including several hundred grams & capsules of anabolic steroids, erythropoietin (EPO), syringes, and other doping products) was found in a car belonging to the Festina cycling team just before the start of the race.

As a result an investigation began and it revealed systematic doping of the Festina team and also raised suspicions that there may have been a widespread network of doping among many teams competing in the Tour de France. Hotels were then searched by police, confessions were made by retired and current riders, and team personnel were arrested or detained. Several teams even went on to withdraw from the race.

By December 2000, all nine Festina riders had confessed to using erythropoietin (EPO) and other substances during the 1998 Tour de France, and suspended sentences ranging from 5–12 months were handed out to the Festina team’s current & former soigneurs, manager and communication officer. Two accused pharmacists were also given fines, while the case against the Festina team doctor was dropped due to his deteriorating health.

It was the Festina affair that led to the formation of the World Anti-Doping Agency.

According to the head of Spain’s anti-doping agency, the investigation and trial involved in Operacion Puerto ‘was part of a major transformation of cycling into a cleaner sport.’

In May 2006, Spain’s Guardia Civil uncovered what later became cycling’s biggest doping ring that extended across Europe and that implicated nearly 60 different riders from 6 teams and involved some of the biggest names in sport, including Olympic time trial gold medalist, Tyler Hamilton.

The man involved in all of this? Dr. Eufemiano Fuentes. Fuentes offered his athletes an array of performance enhancing drugs, training programs, and full-service blood transfusions, with medical expertise and doping calendars, all with the aim to avoid detection.

However this doping ring was discovered when one of Fuentes’ athletes, Jesus Manzano, collapsed due to near fatal dehydration which had been caused by an injection of Oxyglobin before his competition and led to Manzano going to the Spanish authorities. Fuentes was then arrested along with four others and police confiscated buckets of performance enhancing drugs, doping diaries, a client list that made headlines around the world, and 200 bags of blood.

As a result of Operacion Puerto, the UCI became the first international governing body to adopt the biological passport and out-of-competition controls, stiffened penalties, the no-needle policy, and the whereabouts program were also introduced.

The Bay Area Laboratory Cooperative (BALCO) was behind the biggest drugs scandal in athletics history.

BALCO, an American company, manufactured nutritional supplements and was accused of supplying performance enhancing drugs to Major-league Baseball players and other athletes between 1988 and 2002. BALCO’s chemist created a wide range of drugs that, when used in a specific cycle, could go relatively undetected by drug testing (even at Olympic level.) The types of drugs manufactured by BALCO included erythropoietin, human growth hormone, modafinil, testosterone cream, and tetrahydrogestrinone.

BALCO’s selling of these substances went undetected from 1988 – 2002 until an official federal investigation began along with a covert, investigation by the USADA. Later in 2003, an anonymous tipster (who later turned out to be Trevor Graham, the sprint coach to Marion Jones and Tim Montgomery) sent a syringe with trace amounts of a mysterious substance to the USADA.

It turned out that this syringe contained tetrahydrogestrinone (THG) – a type of steroid. 550 athletes were then also tested and 20 of these athletes were found to be taking THG. Included in that list of 20 taking THG was Kelli White (British sprinter) Dwain Chambers (shot putter) Kevin Toth (middle distance runner) Regina Jacobs, and hammer throwers John McEwen and Melissa Price – all of whom were subsequently incriminated in the investigation.

Many regard Maradona as one of the greatest footballers of all time but his international career ended when he was sent home from the 1994 World Cup, after failing a drug test for ephedrine doping.

Later in his autobiography, Maradona stated that the test result was due to his personal trainer giving him the power drink, Rip Fuel. He claimed that the U.S. version of the drink, unlike the Argentine drink, contained the chemical ephedrine and that his trainer unknowingly bought the US formula after Maradona ran out of his Argentine drink.

Maradona has also separately claimed that he had an agreement with FIFA (who then went back on this agreement) to allow him to use the drug for weight loss before the competition so that he would be able to play.

In September 1988, Johnson win the 100m final at the Olympics with a world record of 9.79 seconds. However, the Olympic Doping Control Centre then found that Johnson’s urine sample contained stanozolol (an anabolic steroid) and he was disqualified three days later. Johnson later admitted that he used steroids when he ran his previous world record in 1987 and it was this admission that caused the IAAF to revoke that record as well.

Johnson and his coach Francis claimed that they had only used doping to be able to compete with the other top athletes who were also doping. Francis stated that Johnson was only one of many cheaters, but that Johnson just happened to get caught. Later, six of the eight finalists of the 100-meter race also tested positive for banned drugs or were implicated in a drug scandal at some point in their careers.

For much of his career, Armstrong faced persistent allegations of doping but he had always claimed that he never had never given a positive result in any drug test during his cycling career. That was until January 2013, when he finally admitted to these allegations.

In 2012, the United States Anti-Doping Agency (USADA) investigated Armstrong and concluded that Armstrong was doping and trafficking performance-enhancing drugs (PEDs), as well as putting pressure on his teammates to take these PEDs. Later that year, the USADA formally charged Armstrong with running a massive doping ring which they stated as being ‘the most sophisticated, professionalised and successful doping program that sport has ever seen.’

USADA also sought to ban Armstrong from participating in sports that are sanctioned by WADA for life and as all Olympic sports follow the World Anti-Doping Code, this ended Armstrong’s competitive career.

Armstrong was then stripped of all of his achievements from August 1998 which included his seven Tour de France titles. Later in 2013 during an interview, Armstrong confessed that some of the allegations made against him true but he would not testify about the full extent of his use of performance-enhancing drugs.

Russia makes it to number one on this list due to the sheer size of this systematic doping cover-up. Russia has had 41 Olympic medals stripped for doping violations – the highest number stripped from any country. Between 2011 and 2015, more than 1000 Russian athletes who competed in the summer, winter and Paralympic games benefited from this massive cover-up.

· Positive tests were concealed at the London Games, the Sochi Winter Olympics, and the 2013 World Athletics Championships.

· These tests included 15 medalists from London, 2 athletes that competed in Sochi 2014 & who won four gold medals as well as 6 Paralympic medal medalists.

· London 2012 was corrupted by Russian athletes on an ‘unprecedented scale’

· Those involved in the conspiracy included Russian officials within the Ministry of Sport as well as Russia’s security service, FSB.

· The investigations examined allegations that dirty samples were being replaced with clean urine in order to avoid detection.

· A sophisticated, urine-swapping operation by the FSB in Sochi involved removing the supposedly ‘tamper-proof’ sample bottles and drilling a hole in the wall to pass bottles into the official anti-doping laboratory.

Join our newsletter and get 20% discount